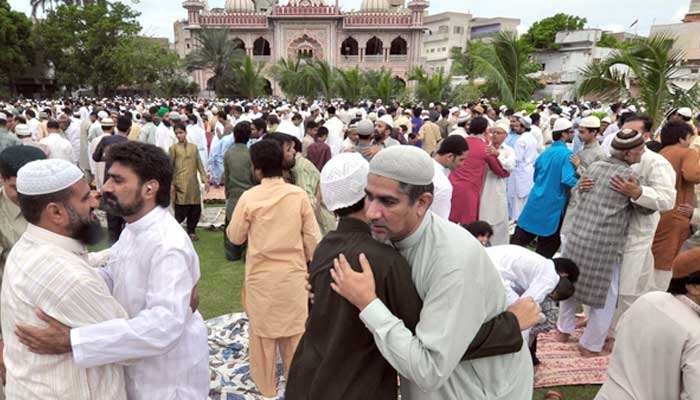 KARACHI: Nation is celebrating Eid-ul-Fitr with great religious fervour and enthusiasm to mark the end of holy month of Ramzan today (Wednesday).

The day  dawned with special prayers for peace, progress and prosperity of the country at the mosques. Eid is an Arabic term meaning “festivity” or “celebration” while Fitr means “to break the fast”. It falls on the first day of Shawwal Al-Mukarram, following a month of fasting.

On the occasion, the faithful  offered Eid prayers at  ‘Eidgahs’ and open places across the country – seeking divine blessings for peace, progress and prosperity.

The president has urged upon the nation to adopt fraternity and compassion in their ranks and work for the progress and prosperity of the country by rising above personal, regional and sectarian biases.

In his message, President Alvi felicitated the entire Muslim Ummah and particularly the Pakistani nation on the joyous occasion of Eidul Fitr.

President Alvi said the festival of Eidul Fitr carries the essence of Islamic values and traditions, and also symbolises the religious ethos. The day embodies the message of sacrifice, care, abstinence from ill-doing, and showing welfare and respect for humanity, he added.

The president said Eid is also a day of completion of the month-long training which Muslims undergo during the blessed month of Ramazan. “The training of patience, tolerance, and sacrifice requires us to continue the same practice during the rest of eleven months. Similarly, the day also honours the worshippers and provides an opportunity for their self-accountability,” he said.

He prayed to Allah Almighty to guide everyone to follow the true teachings of Islam and make the motherland a citadel of peace and prosperity.

Meanwhile, Prime Minister Imran Khan has said that one could enjoy the real festivities of Eid by showing compassion to and share pleasures with the needy and poor people.

In his message to the countrymen on the occasion of Eidul Fitr, the prime minister said the objective of Eidul Fitr was to promote unity, brotherhood, sacrifice and generosity among the Muslims. He extended greetings to the nation and thanked Allah Almighty for blessing with such a festive day.

He said the people could only share joys of Eid with others unless they abided by the golden principles of Islam and promote generosity by doing away with negative behaviour including jealousy, greed and hatred.

He said the government had embarked upon the journey to put country on track of progress and prosperity. “Insha Allah, we will soon succeed in developing Pakistan on the pattern of State of Madina by ridding it of social and economic challenges,” he remarked. He said the State of Madina had become a model in the human history that had won laurels for contributing to the human welfare. The incumbent government would continue to playing its responsible role for developing Pakistan into a real welfare state, he added. He also sought public support and struggle to help the government achieve this objective, he added.

The prime minister also prayed to Allah Almighty to make Pakistan a cradle of peace and prosperity for what every Pakistani was yearning.

While Chief of Army Staff (COAS) General Qamar Javed Bajwa has extended his greetings to fellow Pakistanis on Eidul Fitr.

The DG ISPR also wished a happy Eid to the nation on behalf of the armed forces of Pakistan.

Meanwhile, Chairman PPP Bilawal Bhutto Zardari, on the auspicious occasion of Eidul Fitr, wished to greet the Muslims throughout the world and of Pakistan in particular and pray for peace and prosperity.

In his message on the eve of Eidul Fitr Bilawal Bhutto Zardari said that his thoughts on this Eid were with the poor of the country groaning under unprecedented inflation, unemployment and unable to make both ends meet.

He called upon the affluent to share the joy of Eid with their less fortunate brethren. He said that the spirit of Ramazan is to inculcate the values of tolerance and humility and urged people to imbibe and pursue this spirit even beyond the month of Ramazan.

Following the Eid prayers, Muslims will spend their time feasting with family and friends and feeding those who are less fortunate. Sweets and other special dishes would be prepared for serving to guests. People will also exchange gifts on the occasion. 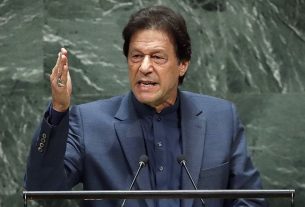 PM Imran minces no words at UN, calls out Modi govt for oppression of Kashmiris 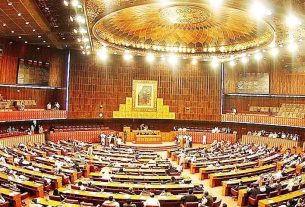 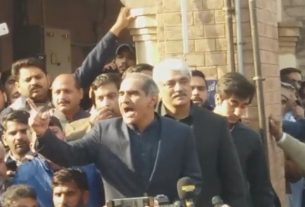