Maj Gen Ghafoor began by providing historical background and context about Pakistan-India ties dating back to Partition, saying that although it had been 70 years since then, “India still hasn’t been able to accept it.”

“Whenever there is supposed to be an important event in Pakistan, or the country is moving towards stability, then there is always some sort of staged incident in either India or occupied Kashmir,” the DG ISPR said, adding that such incidents also seem to occur when India is just months away from elections.

“In Dec 2001 ─ the Indian parliament attack ─ India was supposed to have general elections and the presidential election in 2002, the United Nations General Assembly was in session. It was around this time that an influx of terrorists began on Pakistan’s western border following 9/11.

“When the Mumbai attack took place, our progress in the war on terror was quite good and at this time too, there were to be general elections in India from February to December.

“On Jan 2, 2016, Pathankot happened. The President of the United States’ State of the Union address was due. India was to see state elections and there were foreign secretary-level talks scheduled between India and Pakistan. That was scuttled,” he said.

“The Uri incident happened on Sept 18, 2016, when our prime minister was set to go to the UNGA to deliver a speech,” he added.

“So this pattern shows that whenever in Pakistan there is some important event due, some staged action of this sort takes place,” Maj Gen Ghafoor noted.

He pointed out that there were eight significant events to take place either in Pakistan or involving Pakistan in the period Feb-March 2019:

The DG ISPR also observed that India was to hold elections in the coming months even as “an indigenous struggle in occupied Kashmir is at its peak and out of India’s control”.

“In light of these events, what benefit would Pakistan get from [involvement in] the Pulwama attack?” he questioned.

“I’ll leave it to you to judge who is benefiting from all this.”

‘India should question its security forces’

The DG ISPR also noted certain technical details regarding the Pulwama attack and the claim of responsibility made in a video by a Kashmiri youth that made it appear doubtful that Pakistan had any role in the attack.

“India began showering Pakistan with accusations immediately after the attack without sparing a moment to think, and without any evidence in hand,” Ghafoor said.

“From the Line of Control onwards, Indian security forces have layered defences,” he said, explaining that there were layered lines of defence, one after another.

“How is it possible for anyone from Pakistan to cross the LoC and go to some area where the population of security forces is greater than that of locals?”

“You should question your security forces, that ‘You’ve been sitting here for decades, you spend so much on defence, how was this infiltration possible?’,” he stated.

“The Pulwama attack happened miles away from the LoC. The explosives that were employed were being used by the administration and security forces in occupied Kashmir, it didn’t go there from Pakistan,” Maj Gen Ghafoor said. “The car that was used was also local [to Kashmir]. It did not go there from Pakistan.”

The DG ISPR also pointed out that Adil Dar, the youth who had claimed responsibility for the attack in a video, was a local [to Kashmir] who, like so many other Kashmiri youths, had suffered at the hands of Indian security forces in the past.

“In 2017, he had remained under arrest and security forces maltreated him […] The way he was pushed to the path where he gave this violent response,” he said.

The army’s spokesman said that an expert technical analysis of the claim video ─ looking at quality, the distance from which it was shot, how it was dubbed, what weapons were visible ─ could provide a lot of clues to observers. “Look at the class composition of the soldiers who were killed in the attack,” he suggested.

The army’s spokesman also observed that social media chatter in India had predicted months ago that such an attack would take place as the country rolls into election mode.

Dar’s funeral in absentia was attended by thousands in Kashmir. “It is an indication of the state of affairs in Kashmir,” he asserted.

Maj Gen Ghafoor rubbished rumours that Pakistan is preparing for war. “We are not preparing to initiate anything,” he said. “We have the right to respond to your preparations for war.”

The DG ISPR warned that the Pakistan Army’s battle-hardened forces would provide a military response that would catch India off guard if and when necessary.

“We have defended our country against terrorism […] We are battle hardened,” he explained.

“It was difficult fighting an invisible enemy. India is a non-threat,” he said. “We have studied you for 70 years, watched you, prepared our capability for you. Our response will also be for you.”

“We do not wish to go into war, but please rest assured that should you initiate any aggression ─ first, you will never be able to surprise us. Pakistan armed forces will never be surprised by you. But let me assure you, we shall surprise you,” he promised.

“Because you initiate, we shall also escalate the domination ladder. We shall have a superior force ratio at decisive points. Never think that due to our commitments elsewhere we will have any capacity lacking,” he continued.

“We can respond to full-spectrum threat,” Maj Gen Ghafoor warned. “I hope you get this message and don’t mess with Pakistan.”

‘India needs to introspect on Kashmir’

The DG ISPR reiterated Prime Minister Imran Khan’s offer to Delhi to investigate the attack, hold talks, and eradicate terrorism from the region.

“The biggest threat to regional peace is the Kashmir issue. Come, let’s talk about it and resolve it […] Your policy of violence in occupied Kashmir has failed. You need to introspect,” he said, addressing the Indian government.

There is a need for introspection in India as to why Kashmiris ─ tired of the cruelty of Indian security forces ─ have begun responding to their violence with “this sort of violence”, Ghafoor said.

The DG ISPR pointed out that India is the “world’s biggest democracy” and urged it to uphold democratic and secular norms and the rights of Kashmiris and Muslims in India who have recently faced increasing harassment and discrimination in the aftermath of the Pulwama attack.

He told India that if it wants peace and progress, it shouldn’t send spies such as Jadhav into the country and destroy regional peace.

Maj Gen Ghafoor said he had given “some friends visiting from India a few months ago a message from the army chief” that countries cannot develop alone. “Regions develop. If we also believe that we must develop as a region, we will not go down the path of war.”

“We expect that you will focus responsibly on Pakistan’s offer of peace and won’t become a hurdle in the way of regional peace and stability,” he told Delhi.

The army’s spokesman said that Pakistan in the 21st century was looking towards tackling issues such as education, health, and upholding the right of its citizens and future generations to live in peace ─ “not a war that you are trying to set the stage for”, he admonished India.

“Don’t snatch this right away from your future generations with your foolishness. Your attitude is not in line with humanity.”

The fate of former Inter-Services Intelligence (ISI) chief, retired Lt Gen Asad Durrani, who had faced an official inquiry after he co-authored a book titled The Spy Chronicles: RAW, ISI and the Illusion of Peace with former Indian spy chief A.S. Dulat, was also referred to briefly by the military spokesperson.

The DG ISPR said that the military’s inquiry had found Lt Gen Durrani guilty of violating the military code of conduct in the process of writing the book.

He said the court had prescribed the relevant punishment in the case — that Lt Gen Durrani’s pension and other allowances and benefits be withdrawn, but his rank remain intact.

His name is also on the no-fly list, but “we will talk to the Interior Ministry about whether to keep it there or not,” Maj Gen Ghafoor added.

The DG ISPR also confirmed the arrests of two senior army officials on charges of espionage, but said “there is no network between them”.

The army chief has ordered a Field General Court Marshall, which is in process in the two separate cases.

No additional information was offered as to who the officers were, or which country they were spying for.

The army’s spokesman concluded his address by saying Pakistan does not wish to have any physical conflict with anyone, including India, but “if any aggression is imposed, we will defend every inch of our motherland”.

He reviewed security preparations and met the troops, appreciating their readiness and morale.

“Pakistan is a peace loving country but we will not be intimidated or coerced. Any misadventure will be paid back in [the] same coin,” the ISPR reported him as saying 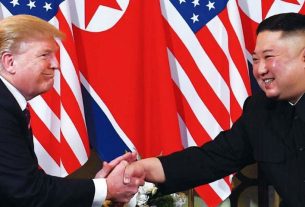 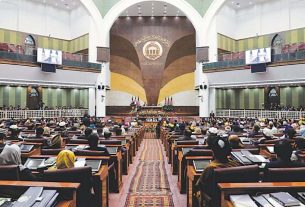 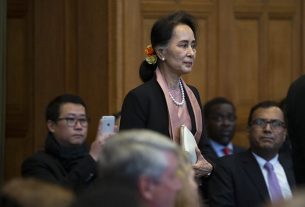